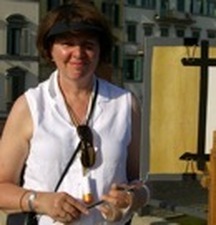 “The magic of painting has captured me ever since I started. It has become my passion”

Working from life allows me to pick up subtleties of color, atmosphere and changing light. I work mostly in oil.
Currently I am  painting still life with all the excitement and joy of working with color, form, texture and the play of light on everyday objects. Even though the composition is carefully planned I strive to keep my paintings fresh and spontaneous. “I hope to convey the mundane, the overlooked and the notion that it is a work of our current time” .

I have studied at the Atelier John Murray on Long Island and the Art Students League in New York City - most notably with artist and teacher Cornelia Foss.
I participated in various group shows and my paintings can be found in private collections in New York and Germany. I currently live in New York City’

From 2001 to 2006  I participated in many juried art shows with awards for excellence, first place, awards of merit and honorable mention at the Village Art Club of Rockville Centre, National Art League, and Art League of Nassau County, NY.